The apartment complex has to turn off our water supply for like 5 hours tomorrow for repairs or something. I wouldn't be surprised if a pipe burst somewhere in the blizzard on Monday. Having grown up in a house with a well, I know the protocol for situations like this.  We have several pitchers of water in the fridge and I filled up the tub for emergency washing and toilet flushing. Gilly treats the tub like his own personal jungle gym and saw no reason to stop just because it was full of icky water. 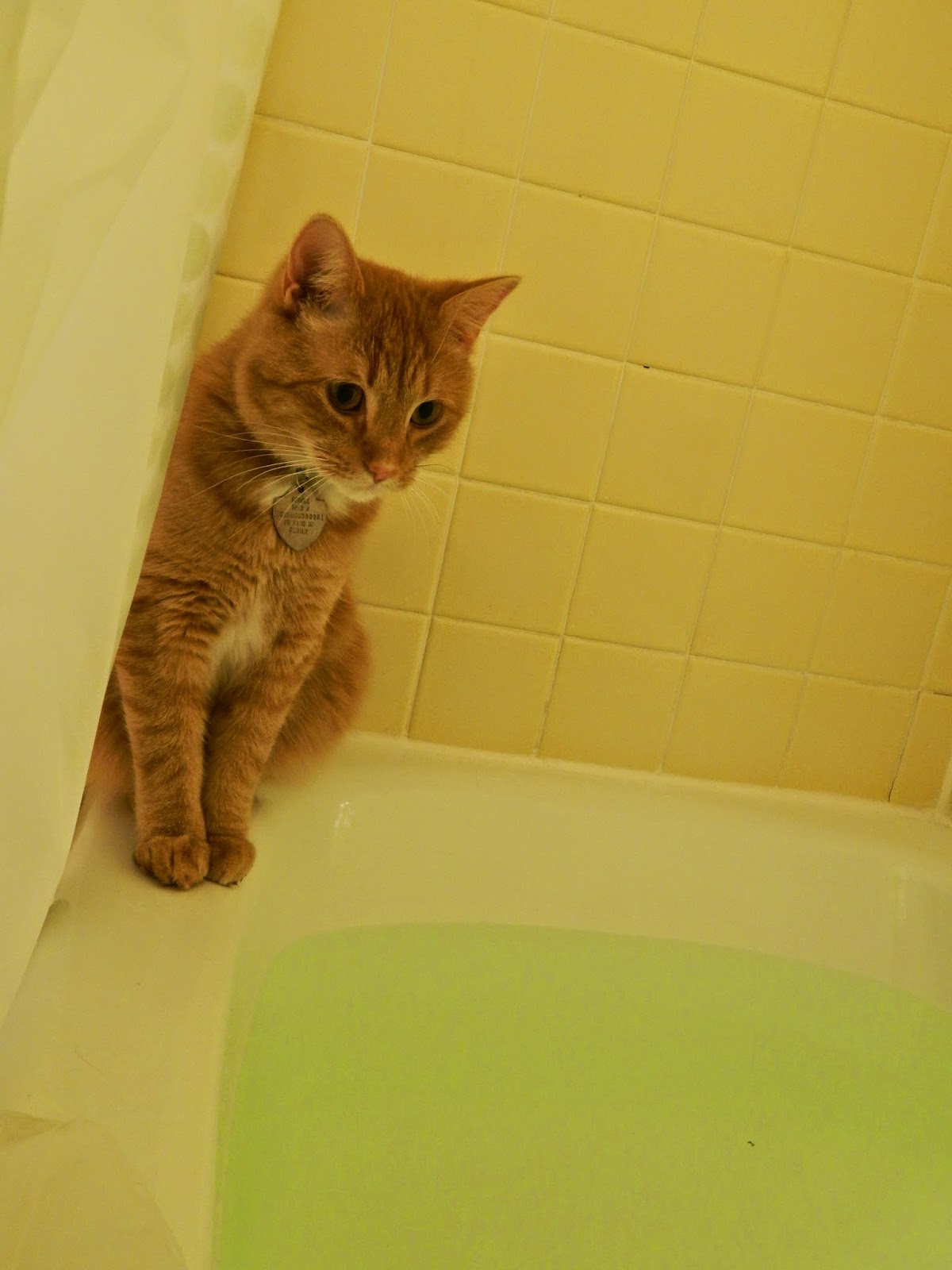 What is this watery disaster which has overtaken
my domain? Is that a speck of dirt I see floating in
this sea of madness?  I must murder it! 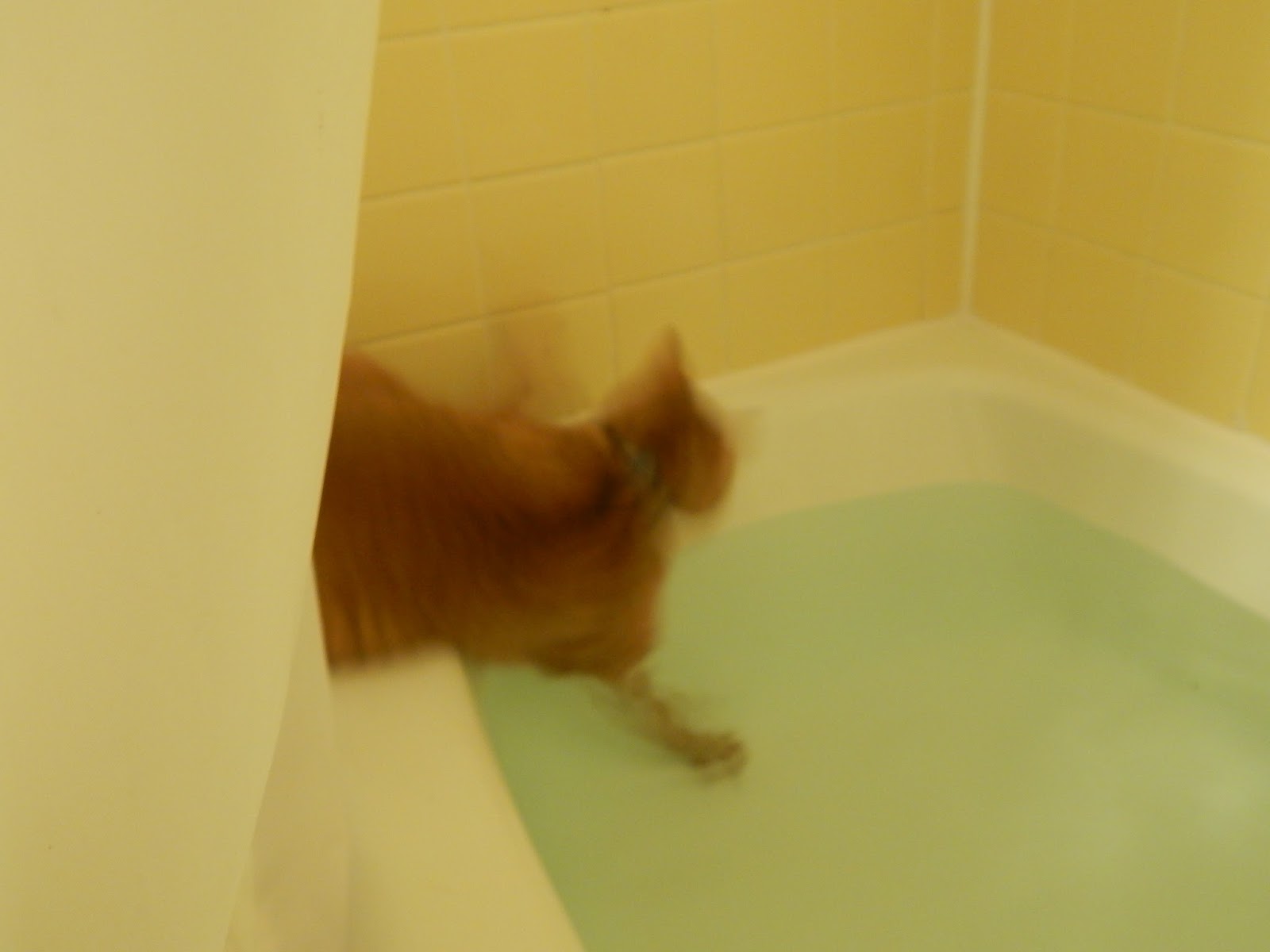 It'll be interesting to see how long it takes him to decide to try sitting on the edge of the tub again.  Gilly is pretty bad at learning from his mistakes.  I give him 45 minutes. Tops. 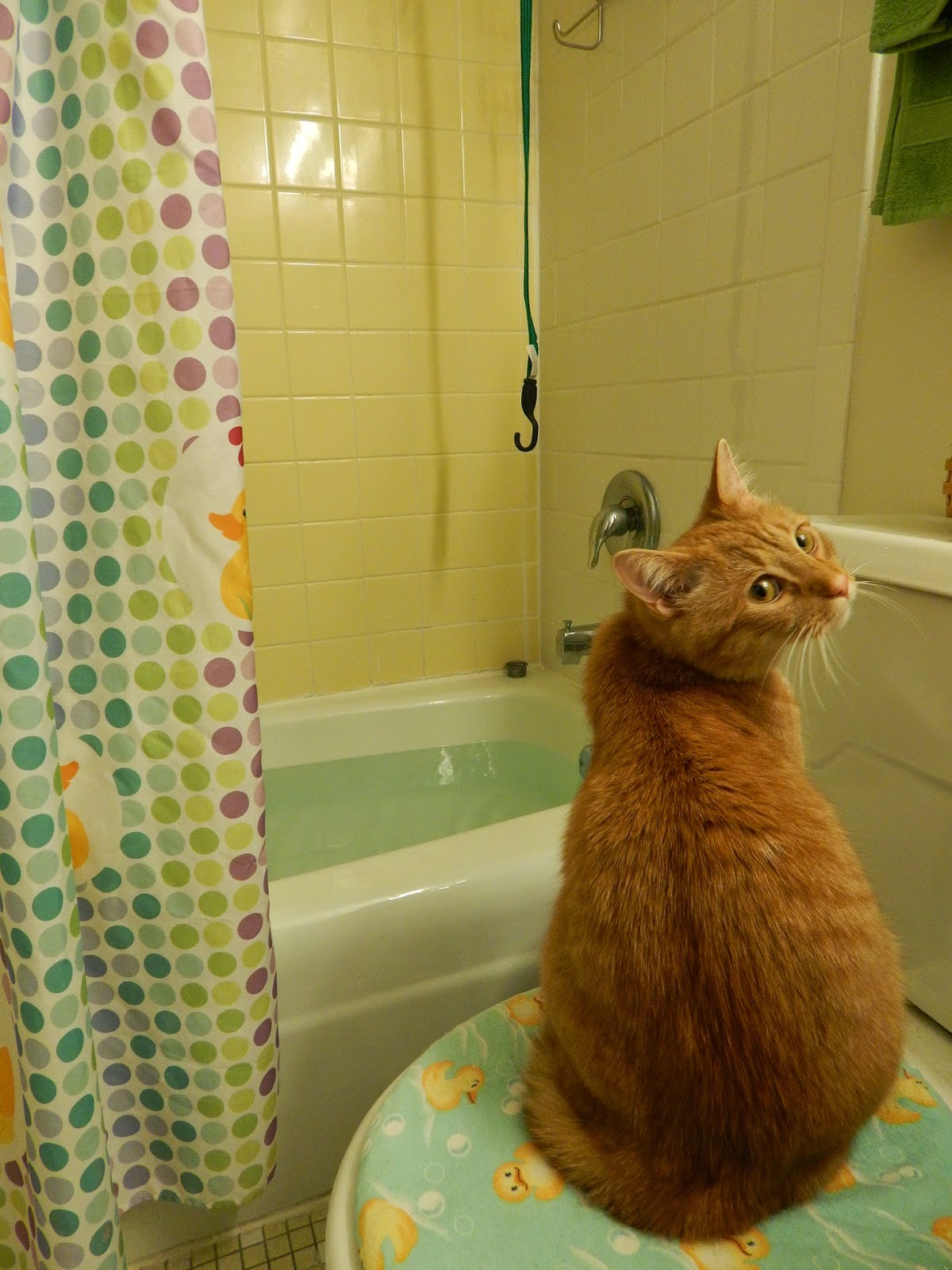 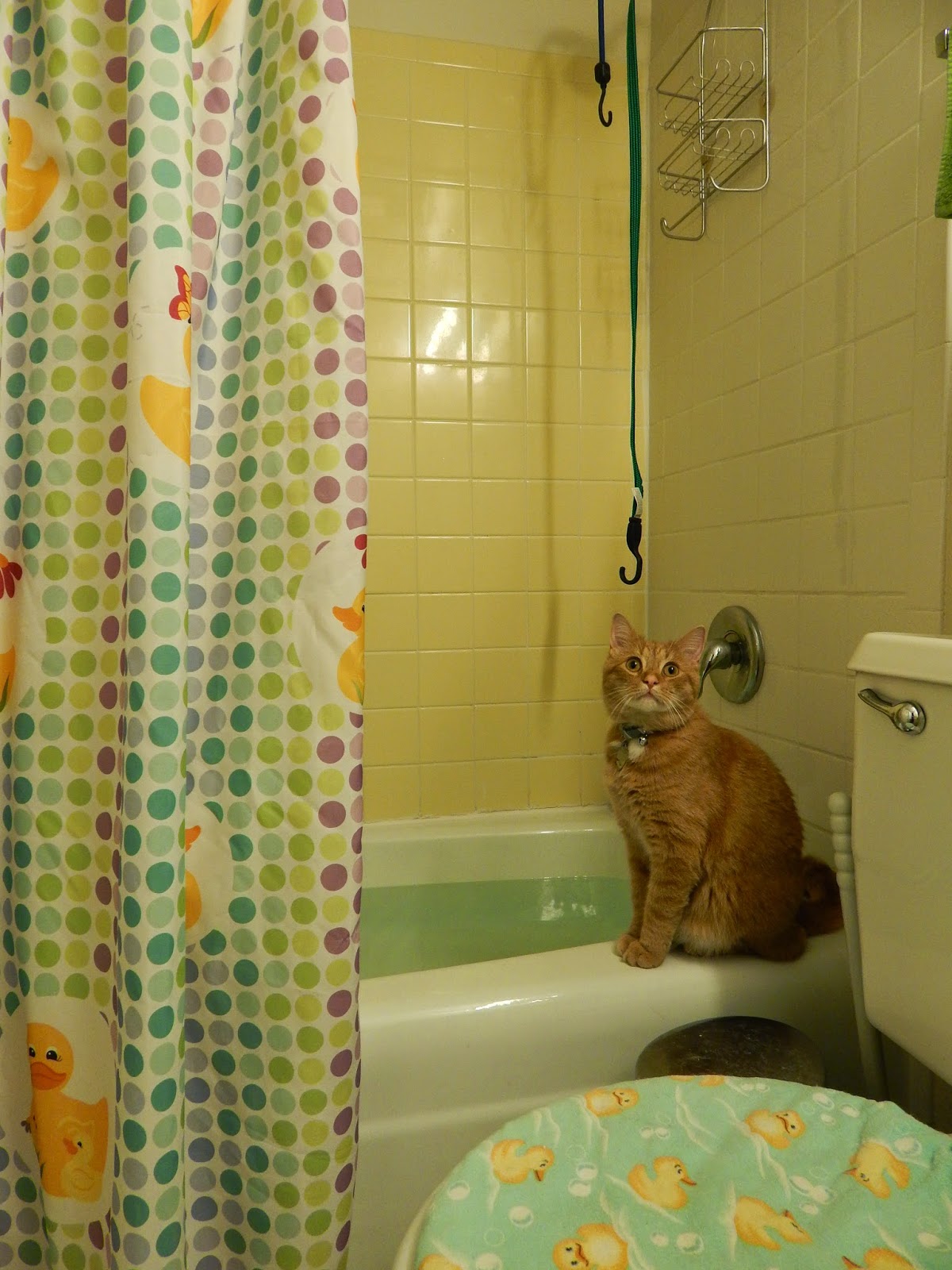 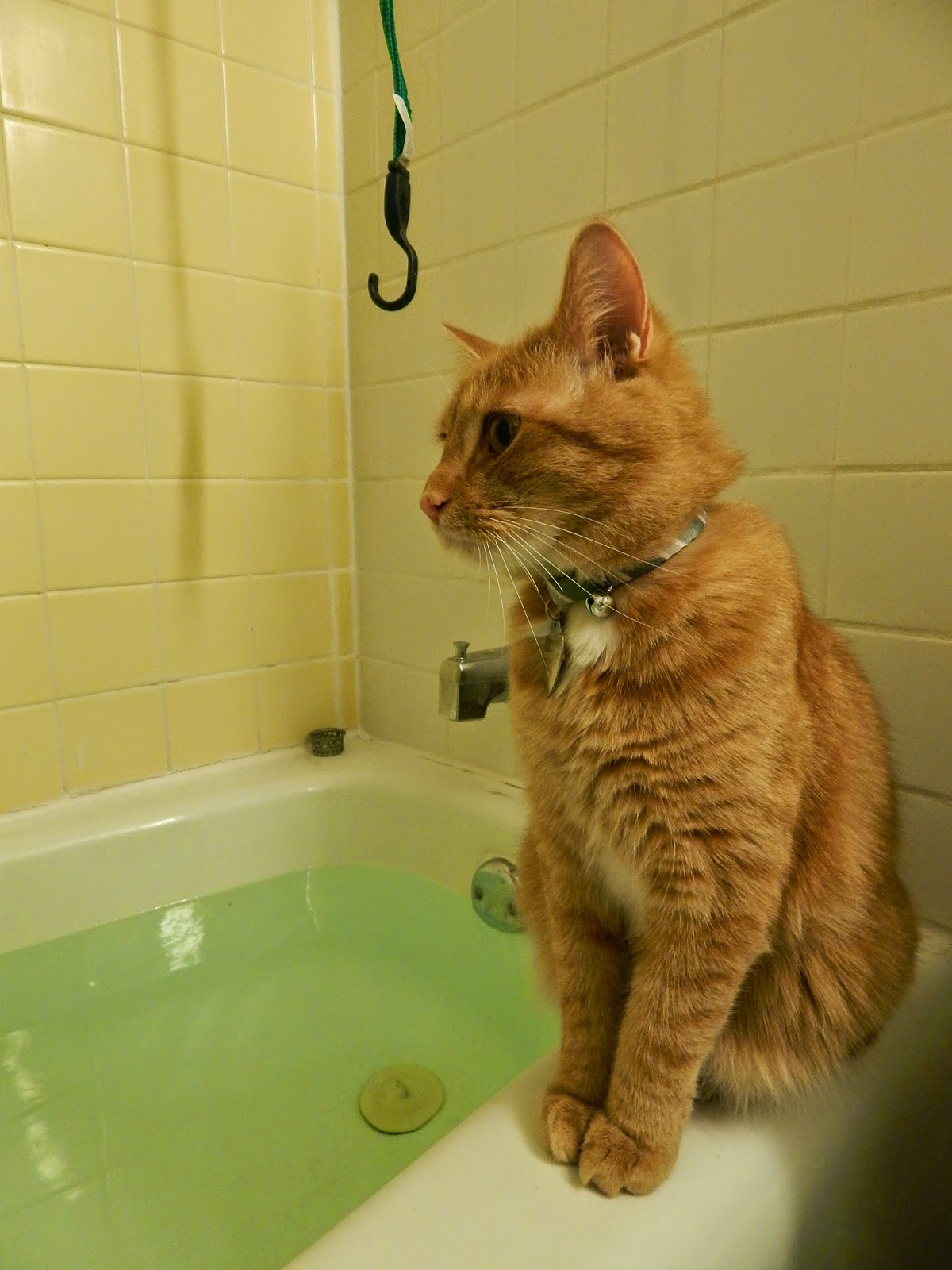 -A smattering of fascinating light up twirly thingies that apparently you're supposed to swing around while dancing?

-A man with a purple squid on his head

- No less than 6 men in skirts. Not kilts, not as cross dressers, but because they wanted to wear skirts. Because why the hell not?

- A baby in a hand made metroid hat

-A really terrifying set of twins (you know who you are!) 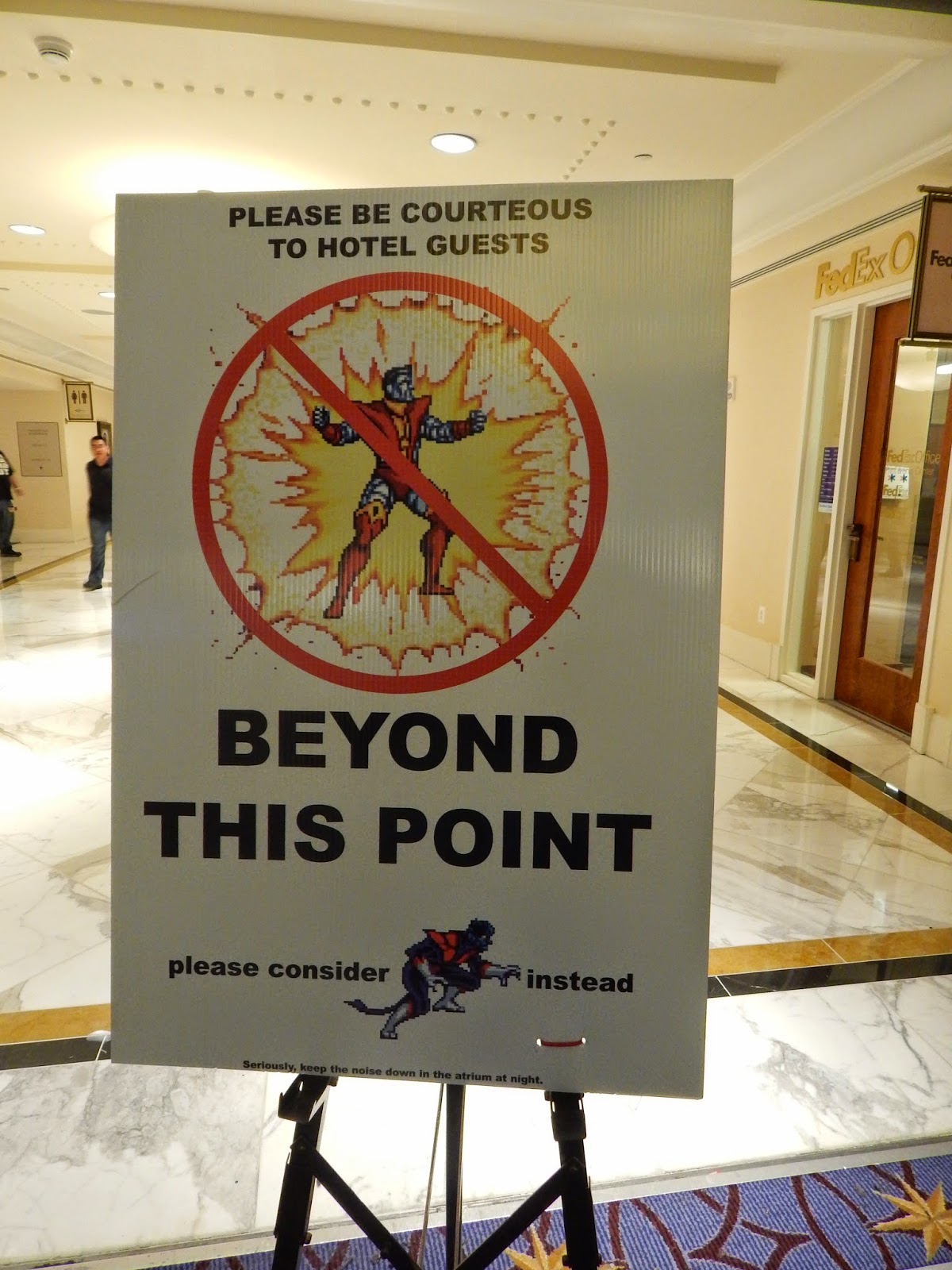 Well, that's not exactly true. Magfest is run by hundreds of crazy talented dedicated people willing to put in thousands of hours of work for little to no pay. Eli happens to be one of them - also he's on the Board of Directors which is why I sometimes claims he "runs" this ball of crazy.

What started out as an excuse for some gamers to party for three days straight in Roanoke Virginia over a decade ago has turned into a gigantic undertaking that sold out every hotel in National Harbor Maryland months ago. Its more than a little overwhelming.

I can claim absolutely no credit for this.  If I'm completely honest, for most of the history of the convention I've been a grumpy Magfest widow. But since I escaped from grad school its finally become my convention too. Its sort of become a marker to measure my health progress from year to year. (eg. This time last year I spent 48 hours unable to tolerate even the most bland of foods. This time two years ago I was getting around the con in a wheelchair.) And its become a really amazing venue to be a vendor.

Geek Chic Knits does a booming business here. I share a table with a few other ladies who craft. Collectively, we call ourselves the Stitch Witches. Its amazing: I get to sit at a booth crocheting for multiple days straight - people I know and love and only get to see once a year come by and talk and give me hugs - I get to wear ridiculous costumes and no one cares because its a video game convention - and every now and again something truly amazing happens like having an honest-to-god rock star buy one of my scarves. Last fall, my favorite artist's husband dropped by and bought her one of my hats. I swear I started crying, I was so happy. 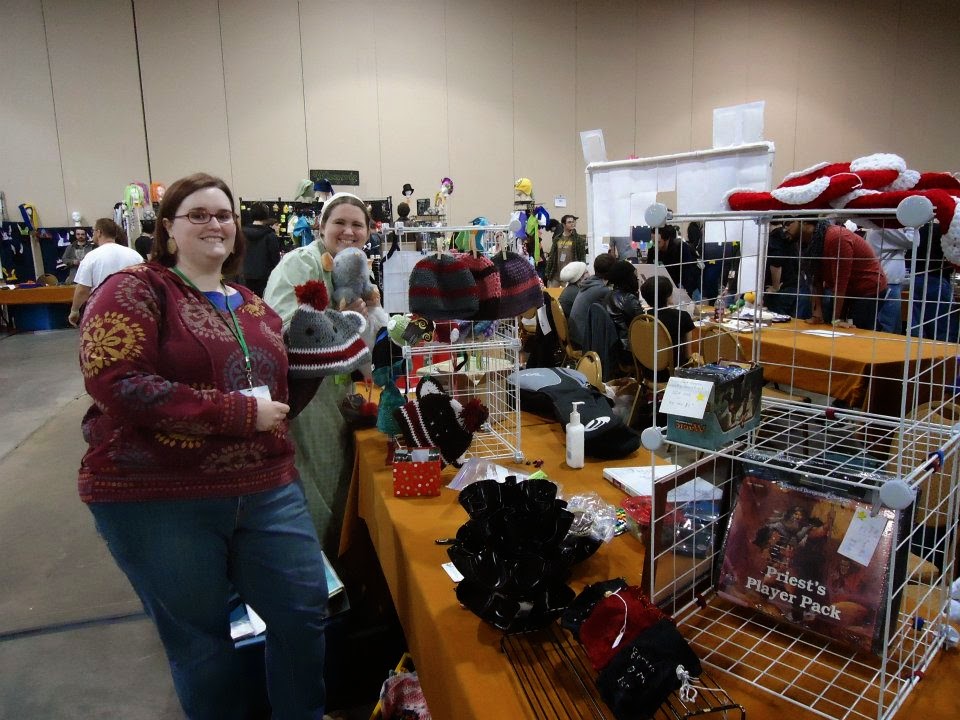 A couple of Stitch Witches set up at Magfest X

It should be a good con this year - we're a little nervous because we're running 3 weeks later than we usually do. Most colleges have already gone back into session so we might miss out on our usual student-on-holiday-break crowd. Pre-registration statistics look like we're going to be getting a huge crowd though.

Since Eli's biggest job is keeping the Magfest computer programs up and running we usually end up being some of the first people at the con for set up. We pretty much move into the Gaylord (yes, that's the actual name of the hotel, don't judge.) for a whole week. I have a couple days before the con starts to sleep whenever I want and read my heart out. Also, I have half a dozen types of loose leaf tea, a teapot and a water boiler at my command.

It should be an awesome week. 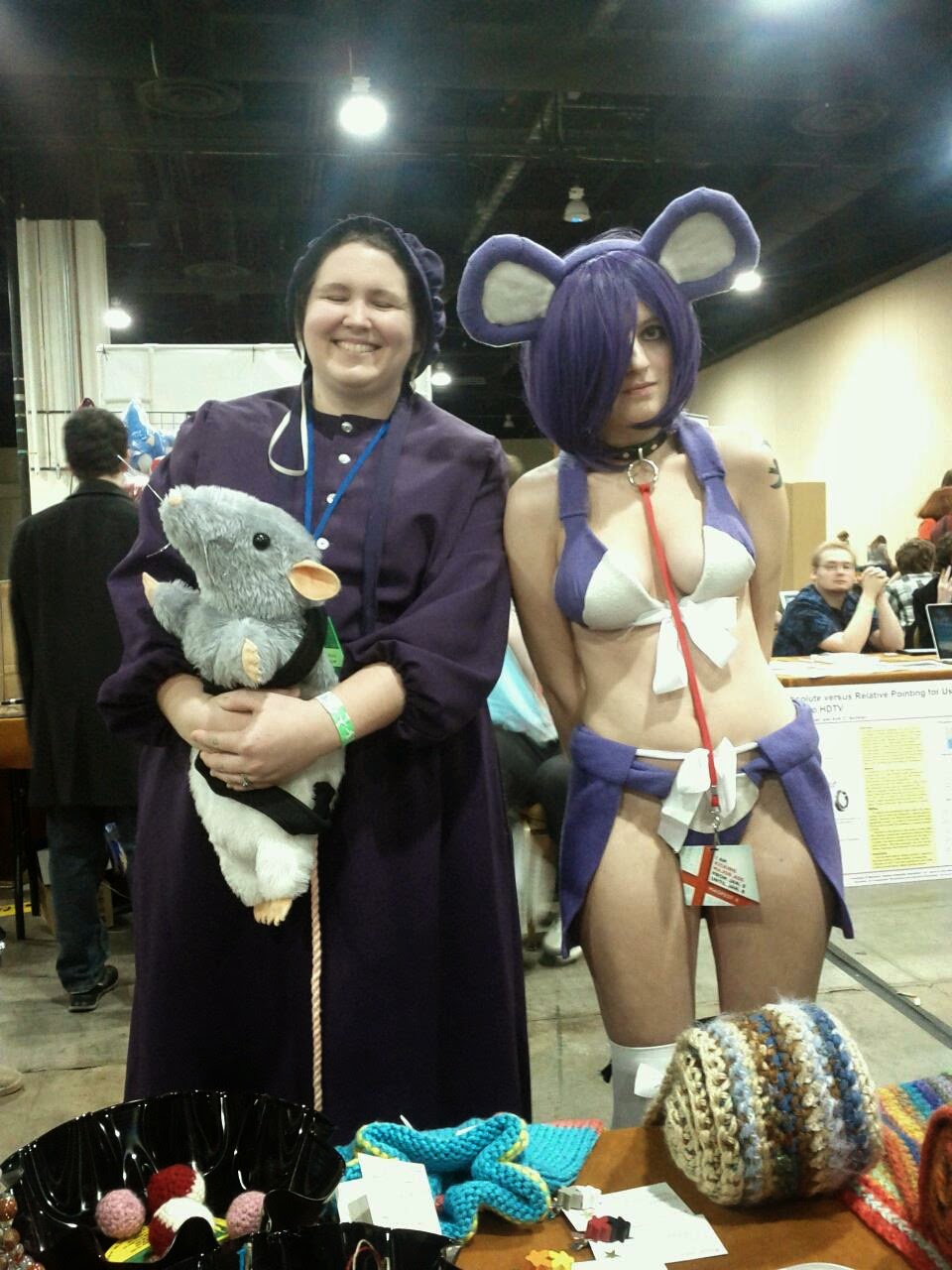 Speaking of costumes - Yes, I do usually just wear Plain dress pretty much everywhere. This was an amazing contrast in modesty. This poor girl must have been so cold. Hell, I was cold.
Posted by Unknown at 1:05 PM No comments:

Even though I'm a Quaker, I still observe the 12 days of Christmas on the liturgical calendar - mostly by procrastinating about taking down my decorations. But Epiphany and Olde Christmas are past so I'm finally out of excuses.

Since we live in an apartment I really didn't want to drag the thing up the stairwell and down the hall. Its pretty dry at this point and it would have ended up leaving half a Christmas tree's worth of pine needles for my neighbors to trip over and track into their homes. Our unit is only one story up so I decided to dump the thing off the balcony.

But its tricky - the neighbors below us don't like it when people above them dump stuff on their patio - so it involved attaching a guide rope and lowering the tree over the one corner of the balcony that doesn't overlap the patio below.

I feel like I've just successfully executed some complicated covert maneuver. "We have achieved Christmas Tree Extraction. Operation 'Drag it to the dumpster' is now a Go! Let's MOVE MOVE MOVE!" 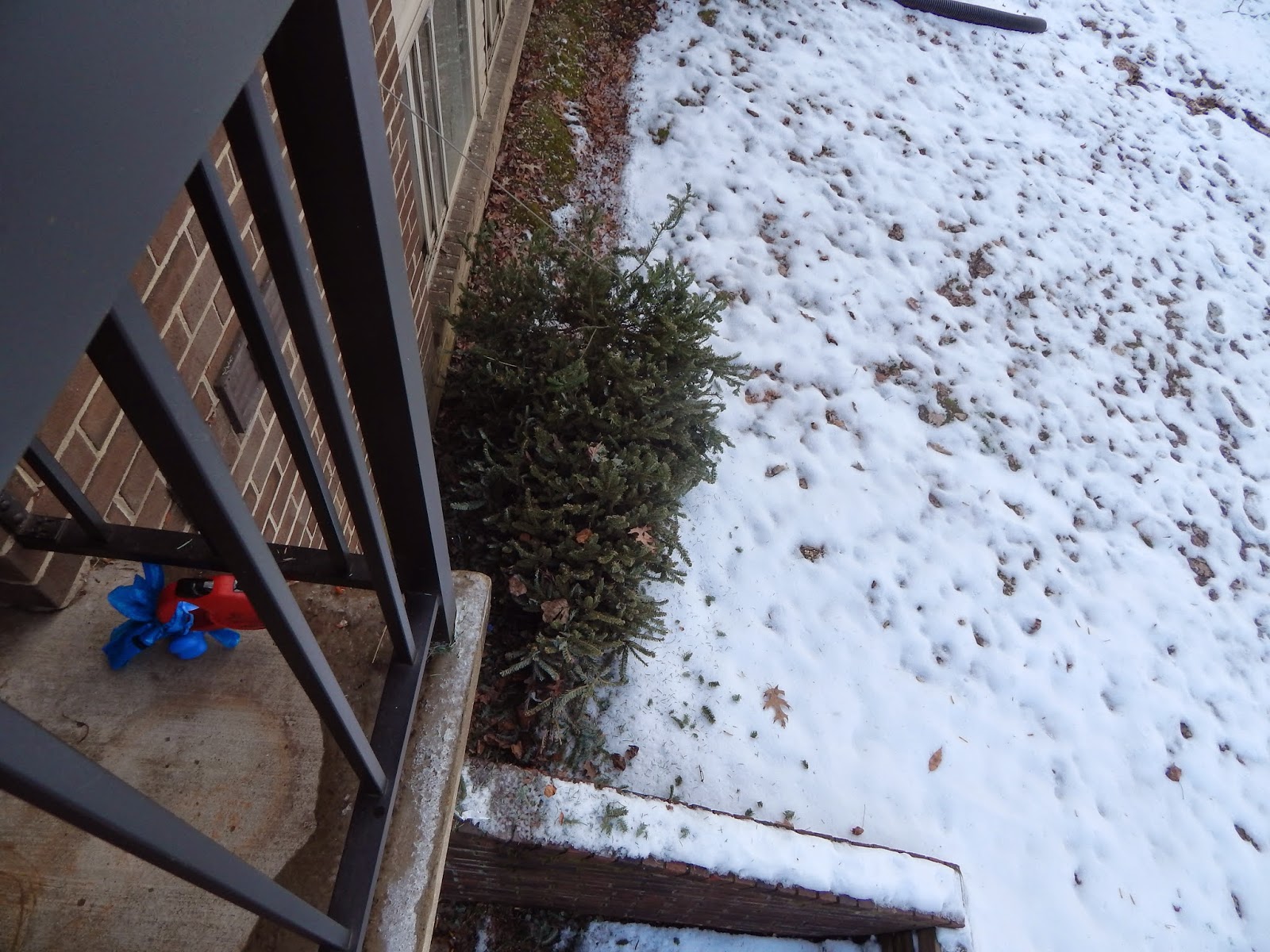 And yes, my "Guide Rope" was in fact a dog leash. Theo was not amused.

My New Years Resolution this year is to turn Geek Chic Knits from a hobby into an actual, viable, small business. Yay! Employment! So I'm going through the whole process of making myself official with the county. I keep losing my website and blog posts every time my computer crashes so I'm going to give this whole blogspot thing a try. Wish me luck. 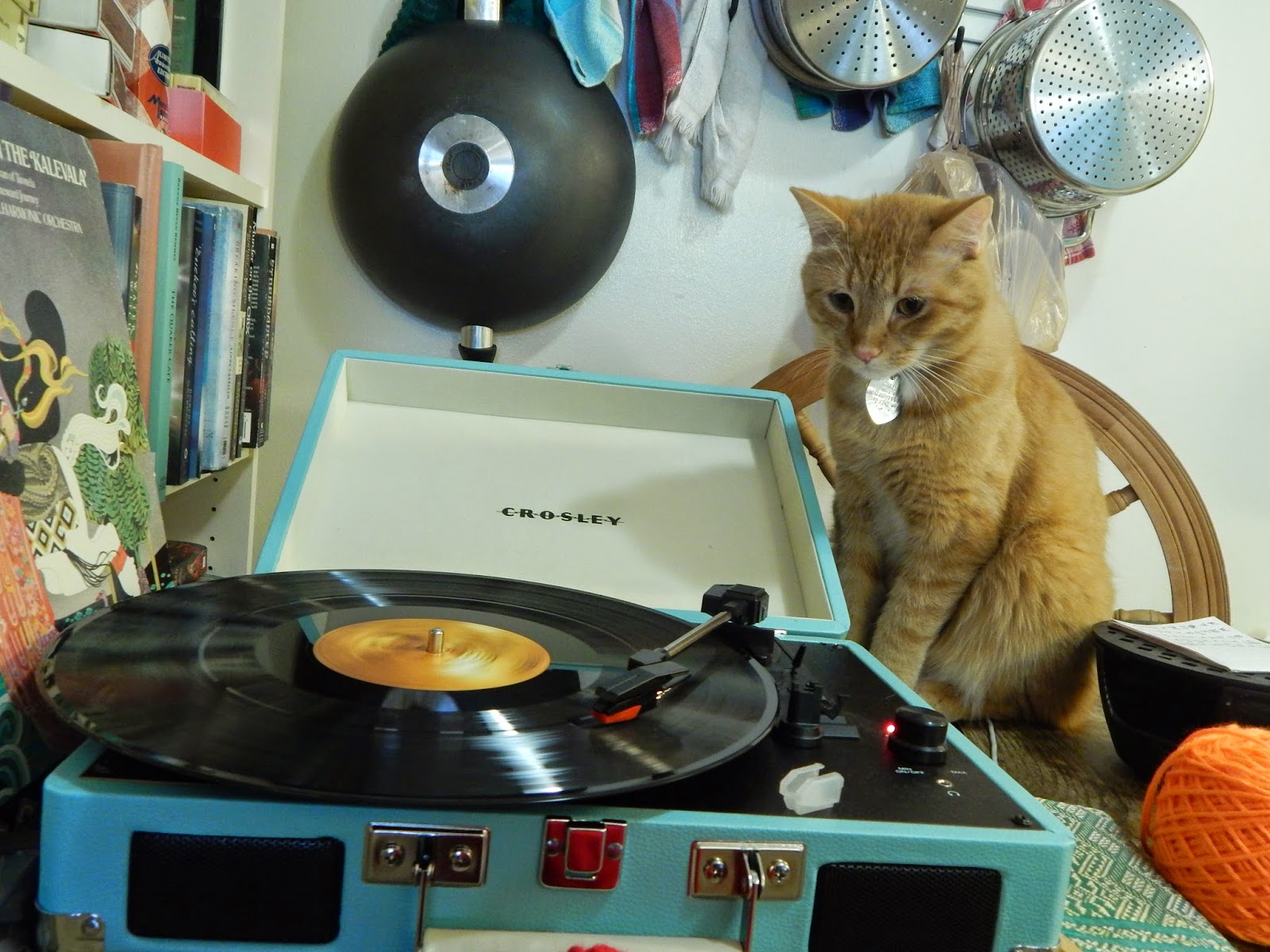 An adorable cat picture. Because I can.
Posted by Unknown at 8:36 PM No comments: