We found our cat, Gilly, under the front porch at our Quaker Meeting in September 2013.  He was a mostly starved, barely weaned, bright orange scrap of fur at the time. And so its not surprising I ended up adopting him. The Sunday school kids named him Gilly, after the founder of our Meeting, unfortunately named Chalkley Gillingham. 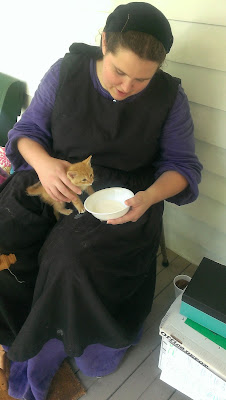 Gilly's grown considerably since then, but I still feel like he needs the chance to get back to his roots. So, when I get the chance, I put on his leash and kitty harness and bundle him off to special events at the Meeting.  Last week was our annual Children's Picnic, so of course Gilly had to come along. He was not particularly thrilled by this at first - it was *really* hot out and there were a lot of small children who *really* wanted to play with the kitty. Gilly spent a lot of time hiding under a picnic blanket. And I made sure we spent a lot of time out in the shade and relative privacy of the cemetery out back of the meetinghouse. 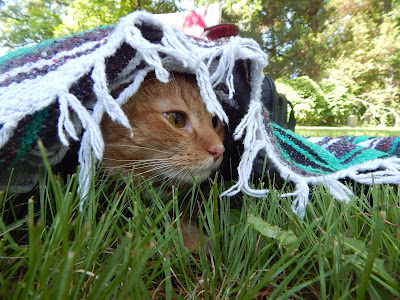 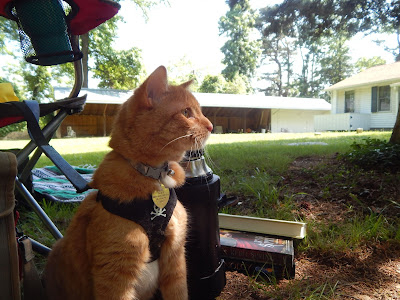 But after lunch was over and the crowds dispersed somewhat, I let him off-lease to go roam around inside the Meeting room. He quickly recovered from his shyness and spent a good hour exploring under the pews and the heating stove.

And lest you worry that my cat was completely traumatized by this adventure, fear not!  He's been sleeping in his cat carrier ever since. And also occasionally sitting in front of the door mewing piteously and begging to go on another adventure.